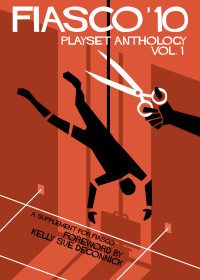 In all honesty, Fiasco is not my favorite game by a landslide. It is safe to say that when my group met up, none of us knew exactly what we were getting into. Even though we watched the videos and Professor Morgen explained the gist of the game, we were still confused. This was my first experience in playing a role playing game and although I did enjoy it, I don’t think I will be partaking in a similar game any time soon.

Although we read the instructions as thoroughly as we could, I had a weird feeling during the whole game that we weren’t doing thing right. This was probably because non of us had any prior experience but I still stand on my statement on this game being extremely complicated to play. The location we chose was Main Street, U.S.A., for no reason in particular. The names we chose for our characters were: Chuck Danger, Huge Ackman, Sally Symbol, Gary Green. For some weird reason, I had to rush to get out of town with a garage worth full of Amway products. Needless to say, this game is full of these weird situations. There was murder in fast food restaurants, plot twists, dead people who turned out to actually not be dead, and much, much more.

As the game went on, things kept on getting weirder and weirder.If I remember correctly, Huge Ackman wanted to get laid by an older lover and Chuck Danger wanted to get rich by killing an older person… pretty weird stuff. We decided to act some stuff out, but we were pretty limited to how loud and weird we could get, as we were in a library.

All in all, this game allowed us to get out of our comfort zone developing relationships between characters, setting, tone, and an overall pretty weird and uncomfortable plot. This game was a really unique experience for me, as I am not really into role playing games. In the end, it appeared that Gary Green was dead but there is now way to know for sure. As for the fates of the other players, Chuck Danger died from a self inflicted wound, Huge Ackman was utterly powerless and broken, and Sally Symbol was dead on the inside. It would be an understatement to say that I was surprised by what the game brought to the table, as I was definitely not expecting such a unique game that would both make me laugh and question the intentions and sanity of those who created Fiasco.